Inflation during the past year has hit a generational high and has caused the end of a very strong economic expansion. The economic expansion may continue, but if it does it will be weakened by surging interest rates and collapsing consumer and business confidence. Inflation this high crowds out everything else in terms of economic importance. Until inflation moderates, the economy will be unable to mount a new robust expansion.

Inflation is almost always a result of monetary or fiscal policies. In today’s case both fiscal and monetary authorities made major missteps that caused inflation to worsen. The president and congress erred in passing one too many stimulus bills after the economy was already rebounding strongly. The American Rescue plan passed on March 11, 2021 provided $1.9 trillion on top of the $3 trillion in stimulus provided in the previous 12 months. This spurred even more demand in the wake of severe supply chain issues. With the benefit of hindsight, it was too much fiscal stimulus.

The Federal Reserve erred in keeping monetary policy very accommodative for many months after inflation began to rise. A full year of “temporary” inflation caused by supply chain issues confounded the Fed’s ability to see wage and housing inflation as a problem. It may not have been obvious in March of 2021, but in July of 2022 it is clear the Fed was tardy in tightening policy. More recently the chair of the Federal Reserve, Jerome Powell, elevated controlling inflation by raising rates and suspending bond purchases as more important than full employment, stating that the U.S. may have to tolerate a recession.

Sometimes the best cure for high prices is high prices. The high cost of gasoline has motivated people to drive less. Since early this year consumers have purchased less gas than they did last year.[i] Falling demand has begun to impact gas prices, which have been falling since mid-June.

The good news is that inflation may have already peaked. The Bloomberg Commodity Index has been declining for a month now, and is back to the levels it was at in March. Oil, Natural Gas, Grains and metals have all declined by 10% or more in recent weeks. Gasoline prices have dropped by 23 cents in recent weeks, after hitting $5 a gallon in mid-June. Natural-gas prices have declined by a third. U.S. crude slipped from highs above $120 a barrel to less than $100. Wheat, corn and soybeans are all significantly cheaper now than they were at the end of March. Cotton unraveled, losing more than a third of its price since early May. Prices for copper and lumber dropped 22% and 31%. 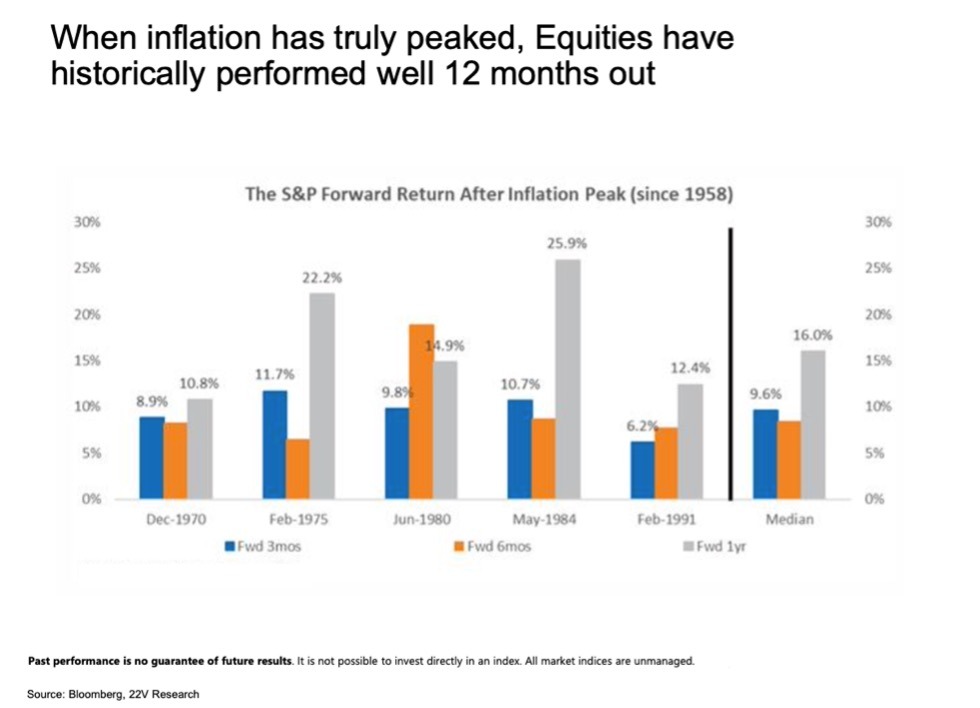 Retail sales fell in May. Consumer spending slowed in May to its lowest level this year.[ii] Existing home sales have been declining since early this year as mortgage rates surge higher. The University of Michigan index of consumer sentiment dropped to its lowest reading ever in records going back to 1952.

GDP has likely contracted for the second consecutive quarter.[iii] In the 12 recessions since World War II economic output declined and unemployment rose in each case. Economic output has declined this year, but employment is still strong. The National Bureau of Economic Research (NBER) is responsible for determining if the economy is in recession. They say “a recession is a significant decline in economic activity spread across the economy, normally visible in production, employment, and other indicators.” We don’t yet know whether the decline in economic output is a temporary result of tighter monetary policy, and growth will resume in the second half of the year. But for now strong employment has kept the economy out of recession.

Families at the lower end of the income scale still have 65% more in savings than they did before the pandemic[iv] and consumers generally are in much better financial condition than they have been in decades. These factors underpin the consumer driven U.S. economy during a period fraught with headwinds, and is likely to moderate weakness in the cyclical parts of the economy.

The average decline in stock prices during the last 11 recessions was 26%[v], so if the economy does go into recession we may already be close to the level of stock prices necessary to reflect a weak economy. 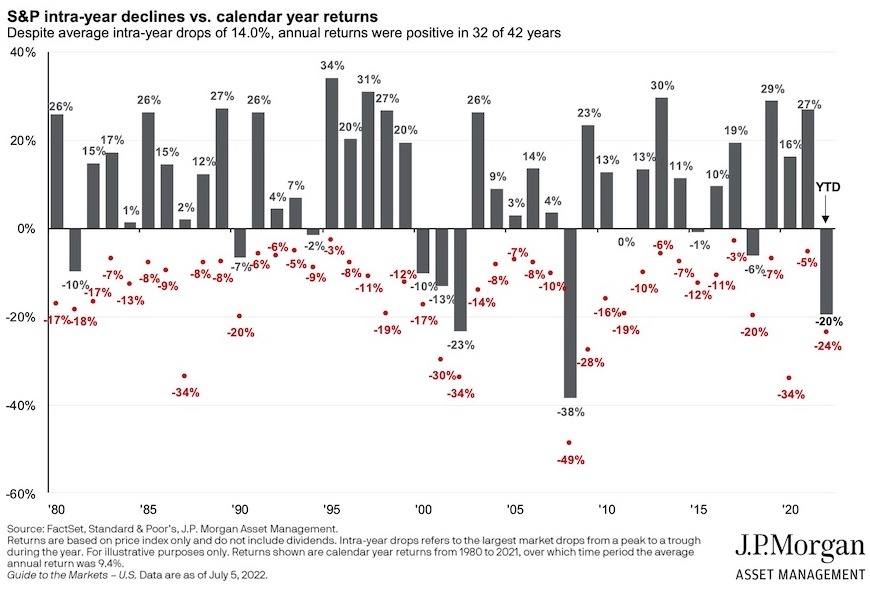 It’s not possible to know when stock prices will recover, but we have been active this year in reducing exposure to those portions of the market with the most risk related to high valuations. We will continue to monitor individual areas of the market to protect portfolios from further downward moves in valuation and prepare to participate in the recovery in stock prices once inflation moderates back to acceptable levels. In taxable portfolios we have been taking the opportunity to harvest losses and reduce future tax bills.

We are grateful for your business and your trust. Please do not hesitate to contact us with any questions.

This commentary contains general information that is not suitable for everyone. The information contained herein should not be construed as personalized investment advice. Past performance is no guarantee of future results. There is no guarantee that the views and opinions expressed in this commentary will come to pass. Investing in the stock market involves gains and losses and may not be suitable for all investors. Information presented herein is subject to change without notice and should not be considered as a solicitation to buy or sell any security.